🚩 With basic model preparations done, we next need a camera position.

💡 Most professional still renderings are a catastrophe when viewed from the subject and toward the camera. 3d scenes are like film sets – perfect as seen from the camera, but outside of its view, there is stuff that if seen would immediately arrest believability.

While it is certainly possible to make a rendering that looks equally good all around, this may take many times the effort, especially for outdoor scenes. If your goal is to produce one still, make up your mind.

⚡ Assume a point of view – place the camera carefully and save it as a scene.

💡 Picking a good vantage point requires imagination, creativity and experience. You need to perceive what is not yet there. If you switch perspective late in the process, you may have wasted considerable effort on details that did not matter. On the other hand, it is dangerous to become locked down too early on, before the subject matter has matured.

To know your subject’s character, you need to explore combinations of objects, lighting, and storytelling. This really is an iterative process, where you must accept trying out ideas in the rough, questioning the subject, perhaps adding something crazy, and sacrificing darlings in order to reach something better.

💡 Historical artworks, especially paintings, are the far by richest source of guiding examples. Not just for composition, but for more or less everything, like subject matter, mood-building, lighting, texture and colour schemes.

💡 For artistic renders, this advice may be the most important of all. If your image should not just be yet another cool illustration or catalogue asset, but an autonomous work – then it must tell some kind of story.

An image is still. It is a snapshot, one moment in time. By creating visuals that help the viewer deduce previous events or have premonitions about what is to come, the viewer’s imagination will irresistibly add a fourth dimension. This is an incredibly powerful technique. The story must evoke strong emotions. All of this can be done openly, or by way of subtle hints and nuances. Eventually, your story will call for certain vantage points. In the best renders, the storytelling drives the perspective.

We won’t delve into questions of form here. But you can always use two old tricks:

💡 This trick is simple, yet effective, and always helps create depth. Often, you only have to add some foreground vegetation and rich background atmosphere to create the magic tripartite division of depth. It helps the viewer overcome that your render is in fact dead flat.

⚡ Use the rule of thirds.

💡 This trick does not add visual substance, but if you get stuck, it can be helpful to lean on. You simply pan and zoom the camera to visually align visible major linear features, like a wall end or a skyline, to where the final image would be cut into vertical and horizontal thirds. Download a free thirds-grid image here, and a halves-grid image here. Use these grid guides as a transparent watermark style which you may toggle as you work.

💡 In two-point perspective, vertical parallels obliterate the third vanishing point. Professional architectural photographers have been using two-point perspective frequently since the 19th century. It conveys intelligibility and control. Once you have set your camera, you may zoom and pan freely. If you orbit the camera, it snaps back to standard three-point perspective.

📷 By now, you may have a rough idea of what to express, or how to get there, with a preliminary camera position to match. And if you should happen to get stuck, the next principle is helpful.

Join us next week as we follow the creative principle of “Work Large to Small”. 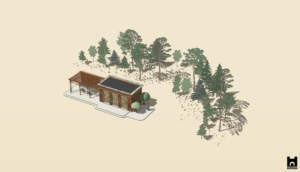 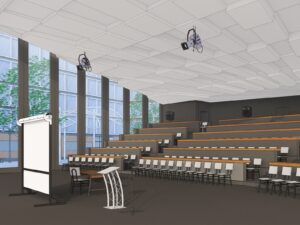 SketchUp Studio for Universities is replacing our original offering of Classic SketchUp Pro Institutional Laptop Licensing, which is no longer available. This new subscription includes more products at convenient tiered pricing based on the number of entitlements you need. 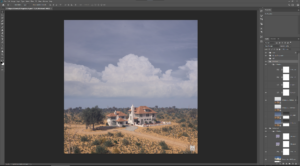 Just as Hollywood would never release a film that is not colour-graded, 3d artists should always post-produce their output before publishing.